Well I am starting to get out and about in Portland.  I know I’ve lived here for almost a year so it’s sad it’s taken me this long to start exploring.

Bill Sharp sent me a notice that the Portland Urban Sketchers were meeting last weekend and I decided to head down to the river and try my hand at drawing in public.

The people were lovely, everyone meet, introduced themselves and then we all wandered off.  I was attracted to a midrise condo building that was on the adjacent to the I5 bridge crossing the Willamette.   I drew it in a way too light pencil and later went back in with a micron pen.

We all met back at 12ish and had a quick look at everyone’s work.  It was interesting seeing how different scenes spoke to each artist.  Many drew or painted the Hawthorne Bridge.  One lady did a watercolor of the same buildings I drew-I loved her painting…she really nailed it.

After meeting up the second time, we went and had a quick lunch.  I was fortunate enough to sit next to a lady named Rosa who allowed me to browse through her sketchbook.  It was filled with stamps/drawings from other artists as well has her own drawings.  She drew the Hawthorne bridge with a ballpoint pen and it was gorgeous!

In August 2009 I posted about artist Seth Haverkamp winning Best of Show at the Portrait Society of America’s Annual Portrait Competition.

I am thrilled to see that Seth is a finalist in the Portrait Society of America’s Annual Portrait Competition for 2014.  This painting is titled Ponderings and it is a gorgeous painting.  If you’re interested in contacting Seth about a commission or just seeing more of his gorgeous work this is a link to his website.

I finally made the leap and moved to the Northwest.  So far I love the area and vibe.  This is a rather broody shot of the Columbia River an on again off again rainy afternoon.

Ocean Park at the Corcoran 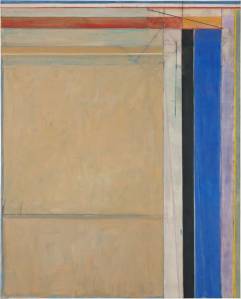 Although I am not a huge fan of nonrepresentational modern art I have my moments. Perhaps it’s more accurate to say that some works have a great effect on me. Rothko, Miro, Close and Diebekorn come to mind.

I guess I love Diebenkorn’s work because I understand where these works are starting from. They are large landscapes, reduced to their most basic forms of shape and color. And oh what color, they scintillate and vibrate. They remind me of all the times I’ve flown over the Midwest; fall and towards sunset are the best season and time for viewing. If I squint and scritch my eyes I can almost see the landscape in those shapes and colors that Diebenkorn captured.

I am so excited that DC is one of the stops for this show. If you live within driving distance of DC I urge you to stop in and be prepared to be utterly wowed.

The Ocean Park series by artist Richard Diebenkorn can be viewed at the Corcoran Museum in Washington DC from now until September 23rd. I just purchased tickets online. If you use code 2Oceanpark you will receive a $2 dollar discount when purchasing your tickets online.

Earlier this month I spent some time in Colorado visiting friends, cooking,  and hanging out by a fire.  At the view at 7-9k feet is exhilarating and simply wonderful.

It is always hard when I return to the East Coast and put nose back to grindstone. I bought a friend tickets to the show Ann at the Kennedy Center for a Christmas gift.  The seats were great and although I didn’t think I’d enjoy a one-woman show about Governor Ann Richards, I did.  In fact I loved it.  The show will run until the middle of January so if you’re in DC try to make it.  You won’t be sorry.

I am hoping to get some time in visiting some museums during the weekend there are some amazing art shows in DC.   There is also the Eternal Life in Ancient Egypt Show at the National Museum of Natural History.  While you’re there peek at the Evolving Universe, hit the Hope Diamond and commune with the dinosaurs.

I am still trying to finish up a lace shawl which is a gift for a dear friend.  Once that is finished and blocked (and two other items are blocked) the final gifts will have been given and the  holidays will be over.

Be safe this weekend.

I am taking this weekend weather threat into consideration and prepping for the hurricane (Irene) for one reason  and one reason only.  Because apparently someone ticked off Mother Nature in DC.

Who would have ever thought we’d have a 5.9 earthquake here? I was at lunch when it struck so luckily i was on the ground floor vice high up in my office.   Once I saw a soda cooler and an ATM heading towards me I yelled earthquake and left the place.

As a public service announcement I’d like to share this weather forecast chart.  I believe it will help everyone make calm and safe decisions in regards to how to prep for Irene.

Seriously though, there is a great hurricane checklist you can download (it’s a pdf) at http://www.redcross.org.

I finished this last night.  The Juneberry Triangle is lace knitting on steroids.  It was not easy to say the least and I had a lot of bumps and issues along the way.

I’m pretty proud of it. 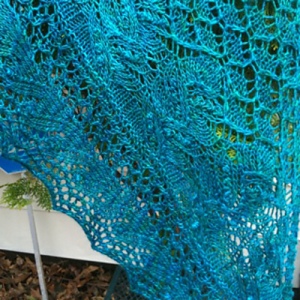 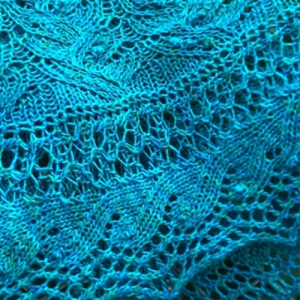 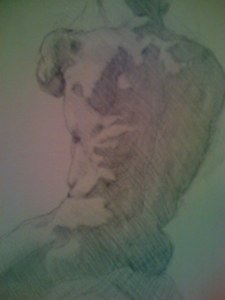 I’ve finally realized the hard way that I am not superwoman.   Not even close. I’ve had some health issues (nothing serious just colds I can’t shake) so I finally decided to sit out a term for Rob.

I hate getting out of the grove but in the fall I only made every other class so it seemed best to just take a break and come back in the spring.

I love this drawing.  I drew it during an upper torso anatomy class with Rob and its one of my favorites.

I’ve been working hard at learning to knit this year.  My first lessons were in April and I’ve working on cowls, some lace, shawls and hyperbolic crochet (for the Washington DC area Coral Reef Project at the Smithsonian).

This is my first sweater.  I’m very proud of it, the pattern is the Gathered Cable Pullover and it’s sold through Interweave.  I used Silky Wool which feels like a washed t-shirt after it’s been blocked and washed.  Very very nice!

Fibre Space, a local yarn store that I love has been selected as the flagship store for designer Jared Flood’s newest endeavor, Shelter.  Shelter is a beautiful yarn that is processed and spun in the states and it’s simply yummy.  I stopped by there yesterday after work to see the loveliness.   I left there with five  skeins of the red (long Johns) and a lovely pattern for a shawl called Terra.

Afterward, I headed to class with Robert Liberace.  I’ve decided that for the next 4 weeks I’d work on silverpoint drawing instead of painting (its a logistical problem).

Once I arrived I found out that the model hadn’t shown in one of the classrooms.  So I told Rob I’d love to model for his demo.  Yes I am evil, but I adore his work and its fun, and modeling gives you a very tiny sense of what a professional model has to endure for his/her job.

So this is the study Rob did.  It’s an initial grasaille, with sienna, black and white used.  He toned his canvas with the sienna and once dray started painting using a #6 brush and black.  I couldn’t see what he was doing, but he said that he was using the black in the manner of Howard Pyle (early 20th century artist and illustrator), like he was drawing with it. and he used it for the shadows.

Rob then went back in with a mid-tone mixed with the white and black to model all the mid-tones and soften the transition between shadows and mid-tones.

Once done to his satisfaction he added more white and captured the light and then used an even brighter light tone for the highlights.  He created this painting in two sessions a total of about 40-50 minutes.

Skating at the Edge of Infinity
Create a free website or blog at WordPress.com.